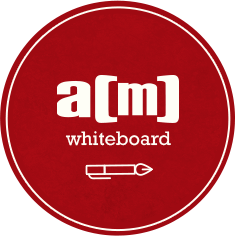 They say nature abhors a vacuum. We love it. When we see a white wall,
we want to write on it. Thus, this space. Like the whiteboard-painted walls
in our conference room, we'll fill it up with ideas, express our opinions and share
what we've learned in our daily quests for insight and knowledge.

Good grammar and writing are essential in the workplace. Whether it’s emailing a coworker, typing a proposal, or constructing a blog post for your company, it’s imperative that you get your point across in a professional, intelligent manner.

However, so many people still continue to make common mistakes while writing. Some mistakes are harder to spot and we may not see them as often. Others, we might notice right away.

Hopefully this list will help you to avoid these common grammar mistakes in the future.

While both words mean a smaller amount of things they have different meanings.

Fewer should only be used when something is countable or if you’re referring to people or things in plural.

Use less when you refer to something that cannot be counted or doesn’t have a plural. Less is also used with numbers when they are on their own and with expressions of time or measurement.

Ex: I spend less time on the computer than I used to.

Ex: My parents are less than 2 hours away.

Impact vs. Affect vs. Impact

In everyday speech affect is a verb, meaning to influence or produce a change in something.

Ex: How does too much candy affect children?

Effect is a commonly used noun like the result or impact of an outcome. When you add an “s” to the end of it making the word effects it means personal belongings.

Ex: The effect of the medicine on his illness was immediate.

Ex: In his will, he left all of his personal effects to his wife.

Ex: The Impact of the car crash totaled his car.

Ex: The ball Impacted against the bat with a loud noise.

Bottom line: If you’re confused, do not use the word impact unless you’re describing a crash .

After you spring forward, you’re in daylight time (EDT), around March- November. Once you fall back, you’re in standard time (EST), which is roughly December through February.

Ex: If you wanted to set up a meeting with a client in December you would set it up for 1:00PM EST

Ex: If you wanted to set up a meeting with a client in July you would set it up for 1:00PM EDT

Then is used with a certain period of time.

Ex: First we went to the shopping, and then we got lunch.

Than is comparing one thing with another.

Ex: I am much better at soccer than my sister.

Principal is a noun referring to someone who holds a position or rank above everyone else. It can also refer to capital or property before interest.

Ex: The principal will see you now.

Principle is only a noun. It refers to a rule, assumption, basic truth or law.

Ex: It’s the principle of the matter!

These are just a few grammatical errors I’ve seen people make quite frequently. Have you noticed your coworkers making mistakes similar to these?